Ruby Cabernet was bred as a crossing of the red wine varieties Carignan and Cabernet Sauvignon. The intention was to develop a variety which had the ability to produce fine wines like Cabernet while tolerating warm to hot climate.

It is one of the so called Olmo varieties, bred by the late Harold Olmo of University of California, Davis.  Ruby Cabernet was further crossed with Grenache to produce the red wine variety Carnelian. 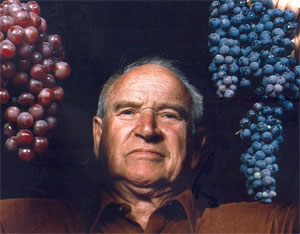 It is fair to say that the aim of producing a variety for fine wines has not been achieved in this case, but Ruby Cabernet has been of some use. The yields are high and the wines are dark coloured with good acid.

Ruby Cabernet is middle to late ripening making it suitable for warm to hot wine regions. It was specifically bred for the Central Valley Region in California, and is also grown in other states of the USA notably Texas, Wisconsin, North Carolina and Virginia.

The most extensive plantings outside of the USA are found in Australia and South Africa.

It's main use is as a blending variety, especially in cask or box wines and is also as part of the blend for fortified wines.